There are those of us who hate surprises but I am one of those who loves a good unexpected event. When it’s a positive situation, that is. Australia Day turned out to be rather sad and droopy this year, with the sky turning a stormy grey right about when I was meeting a Melbourne-based friendwho had just arrived for one day. We had initially agreed on Bondi – as I’m moving out to another ‘burb soon and still haven’t been to Icebergs (shocking indeed). But with pelting rain, soggy clothes and umbrellas in hand, we chose the CBD as more fitting – and convenient – a location. The thing was, most of my fave cafes had shut their doors so instead we sauntered our way through Elizabeth St, expecting to come across something, anything, with welcoming arms (or doors?)! Coincidences I don’t get, fate is the word I tend to go for, it just makes things seem more purposeful and mythical. Zahli, which I had seen being constructed for weeks on end, at 3pm on a dreary Monday was open! Yes! Fate was calling. 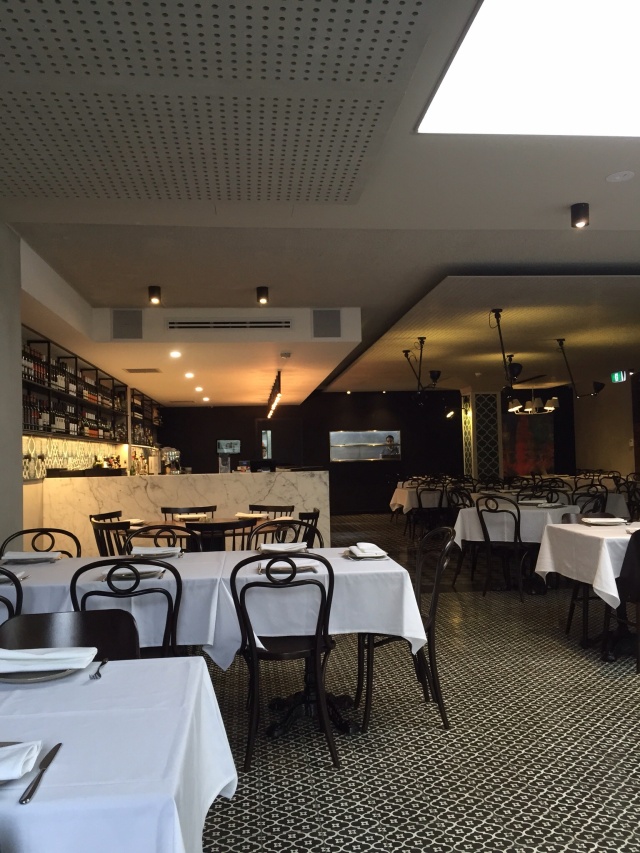 We clambered up a few black-painted steel stairs and what a refreshing sight – a long, wide-open expanse of a restaurant with oriental-patterned blue wallpaper lining the walls, lush plants along the front windows, dark timber tables and chairs with crisp, white cloths draped over. Wow, a real stunner. I’d probably say it’s the nicest interior of a Middle Eastern restaurant I’ve personally encountered. 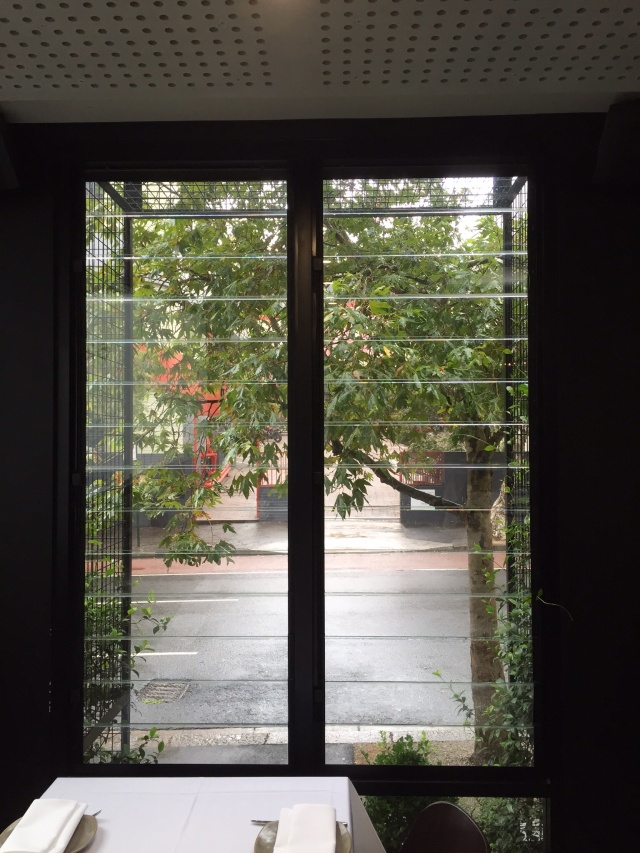 We were seated immediately and browsed hungrily through the menu. I liked what I was reading – modern takes on Lebanese classics like hummus, kibbeh naye, kofta, samke harra and so on. We weren’t quite ravenous so we opted for a few share plates; mezze style. The order of the day was: falafels, ladies fingers and hummus with meat and pine nuts. I’d always wanted to try the meat version of this reliable chickpea dip but had never seen it on other menus. To start, we had a couple of green teas ($4 a pot) served in the loveliest aqua blue teapots and cups to match. 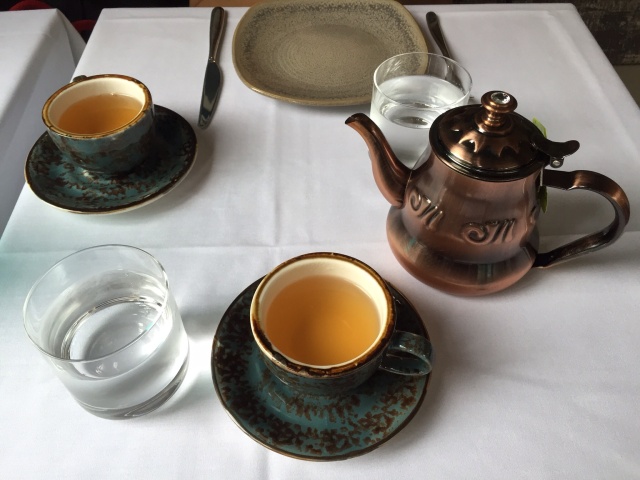 After a short while of chatting away and feeling comfortably secluded in this jungle-like enclosure, our hummus ($15) arrived with two kinds of complimentary Lebanese bread – the fresh type and the deep-fried version sprinkled with za’atar (which we used to slave over a deep-fryer for at my stepmother’s function centre). 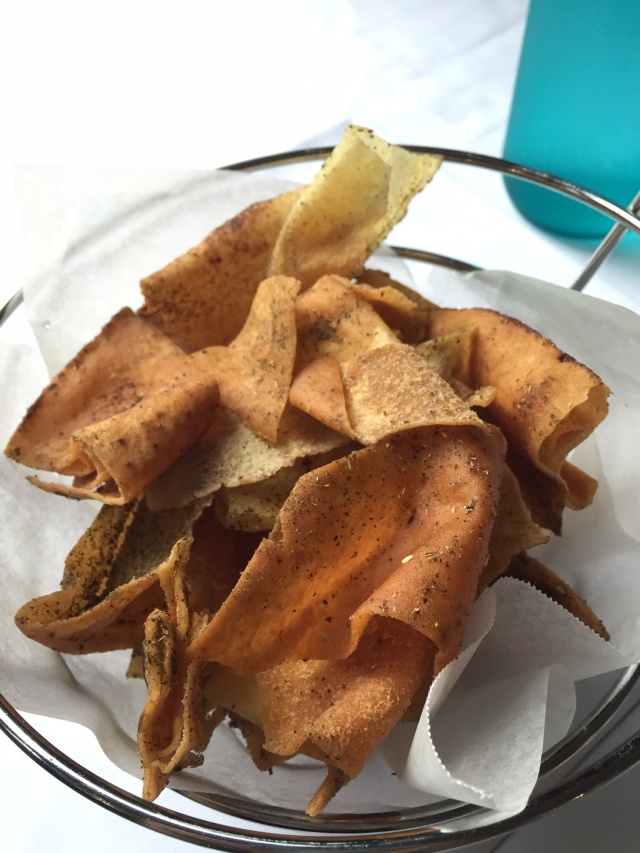 All you carbophobes, steer clear of these deceivingly light crunchy shards of bread. You’ve been warned!

The hummus was brilliantly executed, creamy and not too salty with the minced meat and pine nuts working magic on the palate, adding textural and flavour dimensions to a usually plain dip. Yummo.

Next up were the falafels with tangy pickles and a tahini sauce ($12). They were browned well and when broken open, revealed a lingering spicy aroma and fluffy insides which is always good. The only downfall was that they were a tad dry without the tahini sauce, but still rather delicious. 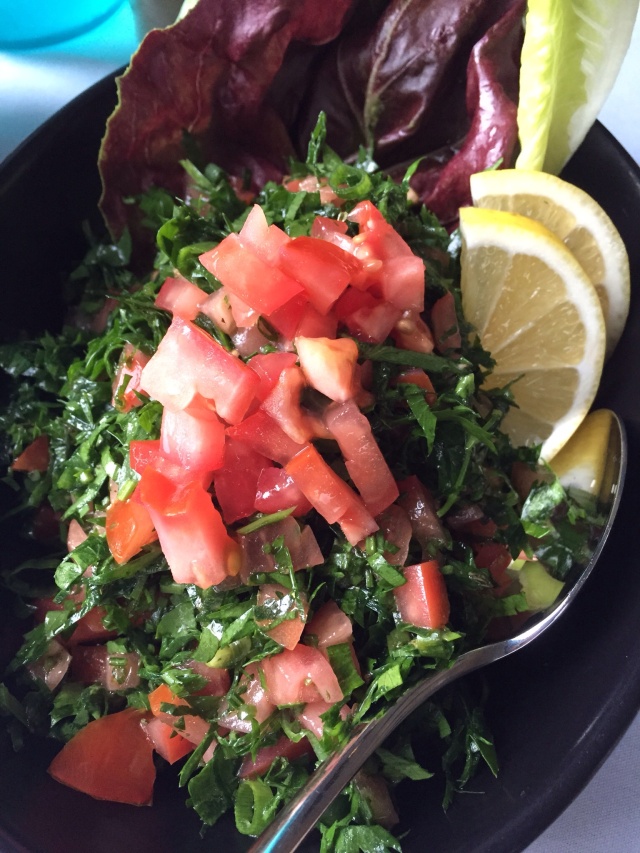 The waitress came over with a large bowl of tabouli ($14) all zingy, vibrant and fresh and told us it was on the house. I think my friend and I were quite startled and delighted as this hardly ever happens to relatively young peeps who dine out. Thanks chef! But thank gosh we received a salad, because it really helped cut through the carb overload of everything we had ordered.

The ladies fingers ($12) were not so great, there was the slight taste of oil on the pastry and the feta and parsley innards weren’t anything to fawn over. We didn’t order much but considering how much thought has gone into every element of this gorgeous restaurant – from the ceramic plates lining the feature wall to the modern menu with classics and new dishes alike – I can safely say Zahli will probably shock and surprise first-time visitors in nothing but a good way. In fact, it’s going on my ‘potential birthday locations’ list. I really need to stop with these lists already hey?